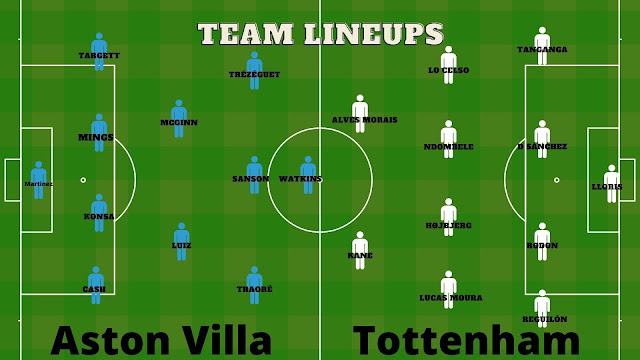 A revitalised Tottenham Hotspur overcame their Europa League defeat, and defeat to arch rivals Arsenal, to prove their pedigree in overcoming a resurgent Aston Villa side.
It is true that Villa lacked their best possible team, however, Tottenham too were without Korean ace Son also. As often is in comprehensive wins, the emotional strength can often be the deciding factor in who wins.
Therefore, it would be interesting to know what rallying cry Mourinho gave the Spurs team, whose confidence may well have been low after those two recent losses. One thing is for sure, Mourinho can talk tough, and his experience in man management will likely have contributed in helping his Spurs team to walk tall once again.

With a start for Carlos Vinicius in place for the absent Son and Bale, and the zippy Moura starting too, Tottenham didn't always have the free flowing style that they can achieve, however, they kept knocking at the door of Villa's defence, and this was rewarded in the 29th minute with a tap in, and first Premier League goal for the London teams efficient new striker, Carlos Vinicius.
Whilst not the hardest goal that he will score in his life, to get the 'monkey off his back' and open his Premier League account, is a foundation that he will hope to continue building upon. Mourinho too must have been pleased with the well oiled movement that led to the goal.
It has to ben said that whilst Tottenham played well, and deserved their victory, Villa were almost completely toothless in from of goal, undoubtedly missing the key unlocking that the absent Jack Grealish would have brought to the game. This Aston Villa team was only a shadow of the team that has been so successful this season, and Tottenham could sense blood in the water...and went in for the kill.
Although the first half ended 0-1 to Tottenham, Villa's pain was not yet over. The second half was statistically the same, with a 1 goal addition to the scoreline, in favour of the visiting Spurs.
The second goal, though, was not quite as decisive as the first. A penalty was awarded to Tottenham after Kane was upended in the box by Cash. I am not sure what your thoughts are on this, however my feelings were that it was more than a little harsh on Matty Cash, with the ball seemingly not under control by Kane, and the contact not brutal, to say the least. Be that as it may, Kane seemingly had no nerves in adding to his 30 goal involvements for the season.

A Timely Win For Mourino

The UK is in strange times over the last year. Whilst Football continues, even this most loved of sports has suffered..subjecting teams to play in empty stadiums.
Something else that has been heightened recently as well, is the impatience of Football with managers who don't win, and win everything quickly. It is understandable since Football is something that can result in many millions being won or lost on the back of a couple of matches.
In this respect, Mourinho has been under scrutiny. The Tottenham team that threatened to edge the Premier League title earlier in the season, has been replaced by one that may not secure European action next year, following defeats to Arsenal and Dinamo Zagreb.
Mourinho himself felt compelling reason to return to Premier League management following his sacking by Manchester United, despite a respectable time with a team in transition.
And, whilst Mourinho would not publicly state that a potential sacking would be greatly worrying for hin, it surely would be a relief to see a sling Tottenham team once again show off his tactical experience in overcoming a notable opponent, especially with the international break heightening the effects of the result of this match.
Labels: Aston Villa FC Carlos Vinicius Dean Smith Football International Break Jack Grealish Jose Mourinho Manchester Untied Mourinho Premier League Spurs Tottenham Hotspur
Location: London, UK